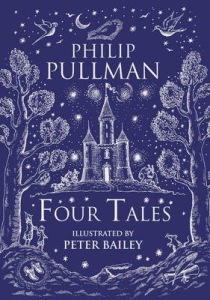 I love fairy tales – stories set once upon a time in imaginary worlds, that take children in unexpected adventures and often teach lessons for life -, and I am a huge fan of Philip Pullman’s His Dark Materials universe, so I could not resist this gorgeous edition that puts together four of the tales he has written. Needless to say, my expectations were high.

Here are the editor’s presentations of the four stories, my review follows each description

What Lila wants to be more than anything else in the world is . . . a Firework-Maker! But firework-making is not just about being able to make Crackle-Dragons and Golden Sneezes. There is also one special secret: every Firework-Maker must make a perilous journey to face the terrifying Fire-Fiend! Not knowing that she needs special protection to survive the Fire-Fiend’s flames, Lila sets off alone. Her friends, Chulak and Hamlet – the King’s white elephant – race after her. But can they possibly reach her in time?

My review : This story did not really got me enthralled. Overall a fun and simple little story to be read at bedtime, but that somehow lacked the “wow” factor. The universe described here did not sweep me away. Moreover, although short stories can be fully satisfying, this one seemed somehow rushed to me. The moral of the story seemed to come a bit out of nowhere , as if the matter had only been superficially explored.  I think younger readers may love it and learn lessons from it, but as a grown-up I found this lacked substance. ⭐️⭐️⭐️/5

I was a rat

“I Was a Rat!” So insists a scruffy boy named Roger. Maybe it’s true. But what is he now? A terrifying monster running wild in the sewers? The Daily Scourge is sure of it. A victim of “Rodent Delusion”? The hospital nurse says yes. A lucrative fairground freak? He is to Mr. Tapscrew. A champion wriggler and a budding thief? That’s what Billy thinks. Or just an ordinary small boy, though a little ratty in his habits? Only three people believe this version of the story. And it may take a royal intervention—and a bit of magic—to convince the rest of the world.
Set against the backdrop of a Royal Wedding—and a playful parody of the press, I Was a Rat! is a magical weaving of humor, fairy tale, and adventure.

My review: This story is  longer and more elaborate, set in a universe really close to ours. It is full of adventure and includes a parody of a tabloid which was fun to read. It is also very interesting to see how different people react to Roger’s story. Some see a business opportunity,some are sceptic and narrow minded, others see a scientific subject, and many a monster. In fact this little story contains a satire about the society we live in : with powerful press, a gullible public opinion and senseless and failing authorities. Everybody, either by simple cowardice, greediness or stupidity, treats Roger with indescribable cruelty. Yes, he suffers a lot of injustice throughout the book but fortunately, Joan and Bob -who seem to be  two of the rare sensible and kind-hearted people in this world, never give up on him, and their relationship with him is very touching. At the end it turns out that in fact all of Roger’s adventures derive from a classical fairy tale premise that the author ingeniously twisted. It is a fun and touching story that embeds a harsh social critic. It notably points out at how we treat those that are declared “different”. This is not a “grandiose” story and I found it hard to get into it at first, but in the end I found it cute, moving and thought-provoking. ⭐️⭐️⭐️⭐️/5

Tick, tock, tick, tock! Some stories are like that. Once you’ve wend them up, nothing will stop them …

A tormented apprentice clock-maker, a deadly mechanical knight in armour – and the sinister Dr Kalmenius, who some say is the devil … Wind up these characters, fit them into a story on a cold winter’s evening, with the snow swirling down, and suddenly life and the story begin to merge in a peculiarly macabre – and unstoppable – way.

My review : This, now, was my favourite. Short but beautiful. I loved the originality of the plot. The atmosphere was dark and strange, gothic in fact, with wicked characters and an uncompromising description of their faults. It had some faustian notes in it. I also loved the author’s comment that were inserted throughout the story in beautifully illustrated boxes. They were full of humour but also severe towards the protagonists. The story was too short  for the characters to be slowly, carefully built. But even as stereotypes, they sounded true and their description was vivid. As Pullman himself pointed out in Four Tales epilogue,  short fairy tales characters cannot be built as in novels, “they are more like masks than people”. And these ones were definitely beautifully crafted and set in an engrossing, wonderfully dark universe. A delight. ⭐️⭐️⭐️⭐️⭐️/5

The Scarecrow and his Servant 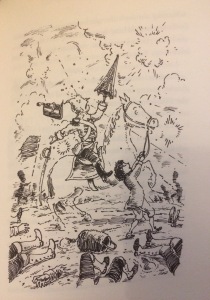 One night there was a thunderstorm. A tattered scarecrow stood in the wind and rain, taking no notice . . . until a bolt of lightning struck his turnip head. The scarecrow blinked with surprise and came to life.
So begins the story of the Scarecrow, a courteous but pea-brained fellow with grand ideas. He meets a boy, Jack, who becomes his faithful servant, and they set out to journey to Spring Valley together. Along the way there’s no end of excitement – battle and shipwreck, brigands and tricksters – and it’s up to Jack time after time to save the day.

My review : I found this story  rich and imaginative. The adventures described were absurd and full of humour. Jack is a very witty and lovable boy and one never gets bored by following him and his naive master through their adventures. Here again, threaded throughout the text was a critic of our society : useless high ranking officials, greedy dishonest companies in bed with the political and judiciary power, coward common people. ⭐️⭐️⭐️⭐️/5

All in all,  Four Tales was a very pleasant read, strewn with some gems : beautiful characters, wonderful universes . Children will certainly love it. And grown-ups will certainly find pleasure in reading it too! And Peter Bailey’s delicate illustrations certainly will add to this pleasure.