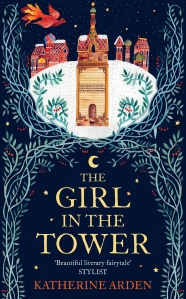 The Girl in the Tower is the second instalment of the Winternight Trilogy, brought to us by the talented Katherine Arden. You may remember how much I loved the first one (little reminder here). So you can imagine how excited I was to read more on Vasya’s story.

Here is the Goodreads blurb, my review follows.

The magical adventure begun in The Bear and the Nightingale continues as brave Vasya, now a young woman, is forced to choose between marriage or life in a convent and instead flees her home—but soon finds herself called upon to help defend the city of Moscow when it comes under siege.

Orphaned and cast out as a witch by her village, Vasya’s options are few: resign herself to life in a convent, or allow her older sister to make her a match with a Moscovite prince. Both doom her to life in a tower, cut off from the vast world she longs to explore. So instead she chooses adventure, disguising herself as a boy and riding her horse into the woods. When a battle with some bandits who have been terrorizing the countryside earns her the admiration of the Grand Prince of Moscow, she must carefully guard the secret of her gender to remain in his good graces—even as she realizes his kingdom is under threat from mysterious forces only she will be able to stop.

When I entered The Bear and the Nightingale (TBATN), I was swept away by a universe I was not familiar with. Eyes sparkling with wonder, I stepped in the cold, whispering chyerti-haunted and shadowy threats-filled northern Russia; savouring the crispy texture of its snowy mystery.

” ‘Long ago, men dreamed me to life , to give a face to the cold and the dark. They set me to rule over them.”

Starting The Girl in the Tower (TGITT) was different, I was in known territory now. So my interest in the story shifted to other topics, a bit. I was still enthralled in the universe, plus there were dark magic newcomers to beware of, the lurking threat of the awakening of a certain Bear to fear, an a charming frost demon to be hypnotized by (ahem). However, this second instalment followed a more classical fantasy path, with intricate political intrigues, clever twists, and Vasya’s quest for identity. And I enjoyed it a lot : it was action packed and well paced. And the writing still held this elegant, lyric tone I appreciated in The Bear and the Nightingale.

The theme of women place in society was carefully explored as well, and Vasya’s struggle to fit in (or more accurately, to keep living outside the box) were highly relatable. Her older sister Olga also showed strength, in a different way, carrying the burden of a bird-in-a-golden-cage life, chin up and feet firmly on the ground. The confrontation between their two destinies and aspirations was strikingly depicted.

“But now those childish dreams dwindled to this : an aging woman, magnificent and solitary, whose tower door never opened, who would make her daughter a proper maiden but never count the cost.”

As for the war between Christianity and the old beliefs, it was still delicately probed.  Reading the first instalment, I questioned the value of Church in this universe where men of God seemed devoured by ambition, pride and hatred (yes Konstantin, I am looking at you). However being reunited with Sacha and introduced to Father Sergei made it clear that more important than the religion you were following, was the heart with which you prayed. It was interesting to see how the way men prayed, thought, dreamt the world around them, could shape this world itself.

” ‘It is going to end, Vasya thought. One day. This world of wonders, where steam in the bathhouse can be a creature that speaks prophecy. One day, there will be only bells and processions. The chyerti will be fog and memory and stirrings in the summer barley.'”

In TBATN, the fading of the folklore creatures seemed to have weakened the people’s defense against the evil at work. After closing TGITT, although I was still  contemplating the possibility of the disappearing of a whole world with sad melancholy, it seemed an unavoidable part of the march of time, the reflect of the evolution of men minds, an evolution that would not necessarily mean the doom of humankind.

“‘One cannot be alive an be immortal. But when the wind blows, and storm hangs heavy upon the world, when men die, I will be there. It is enough.'”

Overall a highly pleasant read. I finished it just after turning the last page of The Toymakers (which I review here, if you have not read this gem of a book yet, please do yourself a favour and get your hands on it!). Ahem what was I saying again? Well, so The Toymakers left me with a longing, a throbbing melancholy; and somehow The Girl in the Tower was refreshing after that. There were emotions, struggles, tensions and all of it was well rendered. Yes I went through a panoply of feelings : anger, joy, pain, impatience, tension, but none of these squeezed my heart too much. I just enjoyed a well written story. And that’s exactly what I needed at the time.  And as throughout the book, Arden hinted at exciting revelations to come, I can’t wait for the last instalment The Winter of the Witch to be released ( it is due in August)!

Side note : It kind of stuns me that after having spent so much years with Sasha,  Dmitrii does not know that he doesn’t have a brother called Vasilii, but yeah, anyway…